Graham Wroe represented Manor Castle Greens when a giant plug arrived at Sheffield Station. Campaigners had brought it all the way from London to highlight the point that we urgently need the line to London to be electrified.

On Saturday Sept 9th, environmental campaigners  boarded a train in London, carrying a giant green electrical plug. The plug continued in a relay all the way to Sheffield. Local groups  along the route called on the Government to reverse the decision made in July to cancel plans to electrify the Midland Mainline beyond Kettering. They are asking the Government to ‘plug in’ their trains to reduce air pollution and carbon emissions.

Campaigners collected signatures on a petition asking the Government not to go back on their promise to electrify the railways. The petition was created by two national organisations, 10:10 and the Campaign for Better Transport. Please sign it here.

Graham Wroe said “Diesel trains contribute to air pollution, which is estimated to cause 40,000 premature deaths a year in the UK and 5000 here in Sheffield.  The station area is a pollution hotspot with diesel fumes from the trains, taxis and traffic. Switching to electric trains would lead to improvements in air quality in the city centre. 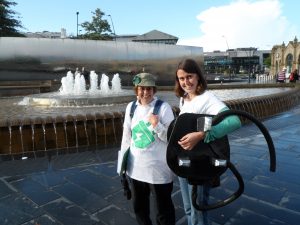