Save the Norfolk Park 6 petition presented to Council 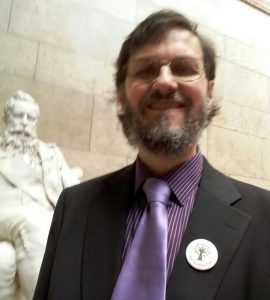 Graham Wroe at the Town Hall

A petition of 738 signatures was presented to Sheffield City Council on April 5th by Save Norfolk Park Trees. The petition asked the Council to Save 6 of the 27 local street trees that are threatened with felling by Amey. Experts have looked at these trees and say they should be saved.
In his speech to the Council, Graham Wroe, chairperson of the group, pointed out that trees being felled for “damaging the pavement” seem to be chosen at random. He showed pictures of a tree that has not been selected for felling that is damaging the pavement far more than ones that have been. Such damage to the pavement should not result in the felling of a tree anyway. Flexi pave should be used on the pavement around such a tree and the cost of this can be covered in Amey’s £2.2 billion contract.
He also complained that despite requesting the tree inspection reports for these trees in January he still has not received them.
Graham said that the survey that the council conducted in the Norfolk Park area was completely flawed as most people do not believe the survey was delivered to them. On Guildford Avenue and Park Spring Drive there were no responses at all. On Norfolk Park Avenue the Council have admitted no one was sent a survey.

A new petition has since been launched to include trees on Holdings Road and Norfolk Park Road. Please sign.

Here is an audio recording of the speech and Julie Dore’s reply.At the end of her speech Jule Dore says  the Guildford Avenue trees “do not yet present an immediate category 1 safety risk so replacement has been delayed with a view to monitoring the condition”. I think this is a small victory!

Here is the text of the speech to Full Council on Wednesday April 5th.

My Lord Mayor, Councillors and esteemed members of the public.
Thank you for allowing me 3 minutes of your time to present the petition “Save the Norfolk Park 6” which has been signed by 738 people. I speak as chair of the group Save Norfolk Park Trees which is affiliated to STAG, Sheffield Trees Action Groups.
I knew 3 minutes would not be enough time to explain everything I want to say, so I have provided all the Councillors with
a) the wording of the petition
b) details and photographs of the trees concerned
c) details of the questions and requests that I have made to Streets Ahead and local Councillors that remain unanswered.
d) the excellent booklet “Save Sheffield Trees” which explains the full background to the Street Tree campaign in Sheffield.
Please look at the document SaveNorfolkPark TreesInfo for Councillors. You will see 4 pictures of pavement around trees. According to the Council, picture D is damaging. The other three pictures are of a tree that is not on the felling list. This shows that the trees chosen for felling for being “damaging” have not been selected with due care. Cllr Midgley wrote that because some people use mobility scooters in the area the two trees on Seabrook and Tylney Roads should be chopped down. I often pushes my wife in a wheelchair and the trees are not a problem. The main problems for wheelchair users are drivers that park across dropped kerbs and the pavement that becomes steps at the bottom of Shrewsbury Road.
Norfolk Park is an area with very few street trees. That makes the trees we do have very special. We accept that some have reached the end of their life and should be replaced. Originally when we found out that the Council wanted to fell 27 trees an ecologist advised that 6 of these trees should be saved. More recently we got the advice of an arborist, who informed us that a further 5 of the 27 trees should be retained. So I am presenting this petition today, to Save the Norfolk Park 6, but will be back to ask you to Save the Norfolk Park 11. Our experts were united in saying that the Norfolk Park 6 should be saved.
Important questions that remain unanswered from my previous communications dating back to January are as follows.
1. I requested the tree inspection reports for the 6 threatened trees on Jan 30th and am still waiting for a response.

2.Why can’t the damage to the pavement for the 2 trees on Tylney and Seabrook be sorted with engineering specifications covered in Amey’s £2,2 billion pound contract?

3. Please can you check that a mistake has not been made on Tylney Road. The tree outside no.7 is said to be damaging the surface, but the damage is far less than others not selected for felling.

4. I also want to raise with you the problems many people have had with the tree survey. One road, Norfolk Park Avenue, was missed out altogether. I strongly suspect other roads such as Guildford Avenue and Park Spring Drive were also missed out as no one recollects receiving a survey and the response rate broke all Council records for poor response rates at 0%. I therefore urge that the trees on Guildford Avenue, Park Spring Drive and Way are referred to the ITP.

Communications with Streets Ahead are problematic. I have a large collection of emails which say
Dear Mr Wroe
Further to my email dated xx, I am still investigating your complaint.
Once I have concluded my investigation I will provide you with a full response.

Thank you for your continued patience.
Kind regards
Jeremy Willis

I don’t know why he is thanking me for my patience because I lost that long ago.
Please save the Norfolk Park 6.