What’s next for Park Hill

After a year of lobbying from the Greens, last night we eventually heard about the plans for Park Hill flats. The first video shows Mark Latham, Director of Regeneration at Urban Splash, explain the next steps. The second video shows the interesting Question and Answer session. We were again disappointed in the lack of any provision for affordable housing.

Some of the highlights

Some of the highlights from the Q&A session included

After the meeting I put Mark Latham in touch with Sheffield Renewables so they can investigate the possibility of solar panels for the roof. 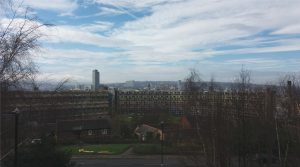