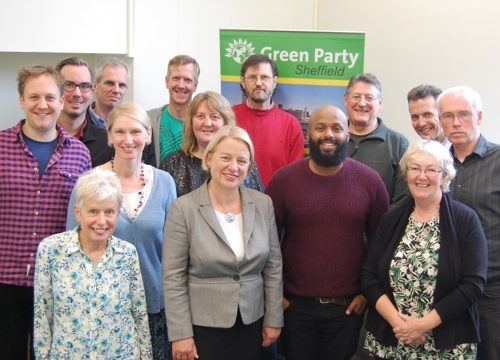 Bennett will take over from Jillian Creasy, who finished second for the Greens in the 2015 general election, the 3rd best result for the party across England and Wales. Sheffield Greens increased their average share of the vote by 5% across the constituency in the May 2016 council elections and have elected councillors in 3 of the 5 wards.

“Jillian Creasy and her teams did a great job over two elections in building up the Green vote in Sheffield Central to take second place in 2015, with the third-highest Green vote across the country. I’m honoured that Green Party members in Sheffield have given me the opportunity to build on that work, to elect the first Green MP in the North.”

“I visited Sheffield regularly as Green Party leader and what I saw made me decide to make my life here. I was inspired by the great radical political tradition and the exciting developments in small businesses, social enterprises and cooperatives. I saw inspiring artistic endeavour, the energy of the universities and their students and experienced the green environment of the Outdoor City.”

“Sheffield is leading the country in redeveloping its industrial roots and building on strengths in the creative and technology industries. The city also stands out for welcoming refugees and developing innovative community institutions in response to the hideous damage inflicted by Tory austerity. It deserves to have its views loudly and clearly represented in Westminster by a party that is resolute and secure in its values and principles and an individual equipped to ensure those views are heard.

“Sheffield deserves an MP from a party that understands that the need to tackle our climate and broader environmental crises is an opportunity to transform our society so that it works for the common good. Greens understand that we must provide everyone with a secure, stable life, with jobs people can build a life on and opportunities for small businesses to thrive. Our policies would deliver an education system that prepares people for life, not just exams, and gives them knowledge and skills, but not massive debts, while ensuring that nobody is left unable to put food on the table or keep a roof over their head.”

Sheffield Green Party Election Agent Eamonn Ward comments: “Sheffield members voted overwhelmingly to select Natalie as our candidate for a likely Spring snap election and will mobilise behind her. Natalie made numerous visits to support Jillian Creasy’s campaign in 2015 and our council election campaign last May. With Natalie as candidate, we can build on solid work since our first councillor was elected here in 2004 and elect the first Green MP in the north.”