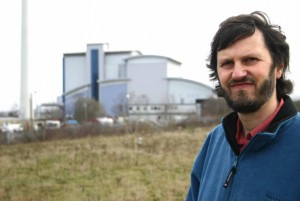 Back in 2001 Greenpeace occupied the Bernard Road incinerator and painted “Toxic Crime” on the chimney. At that time the incinerator was the most polluting in the country and there were grave concerns about the health effects. The emission of dioxins were known to cause cancer, heart disease, liver damage, hormonal disruption, reproductive disorders and much more.

Since then the incinerator has been rebuilt, despite protests from the Green Party which wanted the Council to move to a zero waste strategy. In doing so the Council locked themselves into a contract with Veolia that does not expire until 2036. The new incinerator was heralded as being much cleaner, but is it clean enough? The Star recently reported that the Study by Public Health England into the health effects of Incinerators has been delayed for two years.

People living near the incinerator want to know the reason for the delay. Residents have a right to know what extra risks they face to their health by living near an incinerator.

Sheffield Green Party is urging Public Health England to publish an interim report to explain what they have discovered so far.

Manor Castle Greens have requested data from Veolia and the Environment Agency regarding the quantity of emissions of dioxins from the incinerator.