Election leaflets-what do they tell us? 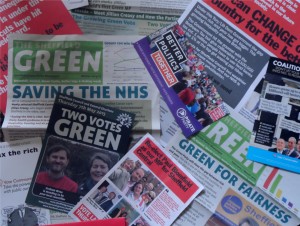 Here is a quick summary of the leaflets that have come through my door this election.

Conservatives. One free post leaflet telling me to Vote for Stephanie Roe. “Don’t let your vote put Ed Miliband into No 10 propped up by other parties”. No mention of the Local Election.

Communist. Freepost leaflet telling me to vote for Steve Andrew to “Tax the Rich”. Includes lots of detailed policies, many of which are in line with Green Party policies such as investing in green jobs, public ownership for rail and energy companies, repeal the bedroom tax and scrap the Health and Social Care Act. Nothing about the local election.

Pirate Party. One freepost leaflet “Better Politics Together” telling me to vote for Andy Halsall. Again lots of information about policies, many of which are similar to the Green Party. Protecting the Health Service, opposing surveillance, protection for whistleblowers, scrapping tuition fees, supporting innovation etc. Nothing about the local election.

Labour . Lots of leaflets including one freepost personally addressed to me. General theme “Vote Labour to stop the Tories getting back in”, (even though it is clear the Tories have absolutely no chance of winning anything in Central constituency). Some policies explained such as scrapping the Bedroom Tax and the gagging law, banning zero hour contracts which of course are also Green Party policies. Others don’t go nearly far enough, such as insulating 5 million homes (needs to be a much bigger programme), cutting tuition fees from £9000 to £6000 (they need abolishing) and increasing the minimum wage (it should be £10 an hour). One leaflet reminds me I have two votes and another tells me my local candidate is Jenny Armstrong, but there is no information about what she has achieved in her 4 year term of office. A graph showing the last General Election result is very prominent in two leaflets, showing the very close fight between Labour and the Lib Dems. The headline is “Don’t let the Lib Dems put the Tories back in”. Of course they don’t mention that since the last election the Lib Dems have faced a meltdown in Sheffield Central and now have no Councillors, whereas the Green Party membership has surged, we have four councillors and we are now clearly the main challengers. The leaflets studiously avoid important topics such as ending austerity, fracking, renewal of Trident and regulating the buses.

The Green Party have delivered a local  election leaflet, three newspapers explaining various policies (“Saving the NHS” “Greens for Fairness” and “It’s Green or Labour on May 7th”) and an addressed freepost leaflet summarising our policies on the NHS, Fair economy, decent housing, safe climate, free education and better transport. I hope you have found these helpful and informative.

Please vote for the Green Party.