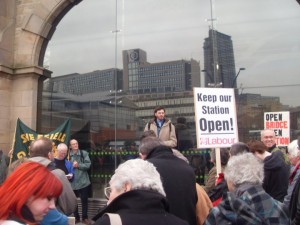 Despite previous reassurances East Midlands Trains carried out another bridge closure ticket check on Thursday. Below are the letters from Residents Against Station Closure to Mr Mickelthwaite from EMT, which helped prevent the situation becoming worse than it actually was. However the operation did nothing to improve relationships between EMT and the traveling public, be they train passengers or pedestrians simply trying to cross the bridge. Many passengers were delayed having to wait in queues to get to the platform. Pedestrians were asked to take a “Pass” and hand this in, instead of a ticket at the other end of the bridge. Lots of people have commented to me about the chaos at the station and the rudeness of the ticket collectors. When I crossed the bridge I refused to take a pass. I was followed across the bridge and my “guard” then informed the ticket collector at the other end. I was allowed to continue on my way, but was annoyed at this unnecessary operation. I fully support EMT trying to catch ticket dodgers, but the best places for them to do this are on the trains or on the platform. There is no need to close off the whole bridge.

The situation on the station side of the bridge was enough to deter anyone not knowing their rights from crossing the bridge There were no signs informing pedestrians about the bridge access- just tape and no entry signs across two of the arches and queues of passengers at the left hand side trying to access the platforms. At least three police officers were present.

I sincerely hope this will be the last time such a ticket check is carried out. Continued obstruction of the bridge may lead to further protests.

We have been in communication with Jason Cocker, Station Manager at Sheffield Station for some months. He has assured us that he and East Midlands Trains wish to have a good relationship with the people of Sheffield, most of whom are your customers as well as members of the local community.

After the ticket check event of 20th March 2014, we spoke with Jason about the damage to relationships caused by the blocking of the footbridge while carrying out this exercise.

We pointed out that obstructing the footbridge not only causes unnecessary delay, anger and frustration it also breaks the assurance given by the then Minister for Transport, Ms. Justine Greening in February 2012 At that time she confirmed that manual ticket barriers would not be installed at the station until such time as an alternative route was in place for people walking through the station.

Implicit in this assurance was the notion that checks would not be carried out in a way which obstructed people going about their business. She was so convinced that free right of passage should be honoured that she allocated £3 million to protect it.

We understand from Jason’s letter of 12th May that your“ directive prior to the event on 20th March was that the event should be conducted with an emphasis on customer service and in such a way as not to deny people across the footbridge when passing through the station.”

Apart from the fact that carrying out the exercise on the footbridge is the method least likely to tackle fare evasion, (checks on trains and platforms being far more effective) we are mystified as to why East Midlands Trains persists in first, requiring it to be done on the footbridge and then compounds the anger by trying to insist that people passing through must take a pass. On 20th March revenue protection staff tried to insist that those people who were not travelling on trains were issued with a ‘pass’ and that this would ‘prove’ that they were bona fida non-train travellers as they handed it in on the other side of the bridge. Pedestrians who chose not to accept the pass, were refused passage across the bridge and they were challenged and escorted by the staff. This happened to a member of our committee.

We spoke with Jason at length about this in our letter of 19th May and explained our position on the point of passes, which were abandoned by EMT back in 2009, as an unrealistic approach for Sheffield. We have heard from Jason today that on the next ticket check on 19th June your staff will attempt to give out passes again.

Clearly as neither Jason Cocker nor Michelle Orchard have the authority to decide that this additional irritant of “passes” can be dropped, we are referring this to you as a matter of urgency. If EMT really wants to maintain good relationships with Sheffield we advise that you stop insisting on issuing “passes” to people to walk across the bridge they paid for and better still carry out revenue protection measures where they are effective i.e. on trains and on platforms and avoid interfering with the effective use of the footbridge.

Following our letter to Neil Micklethwaite yesterday concerning the ticket check exercise planned for tomorrow afternoon 19th June at the Station, he has written us a prompt reply. In it he has stated his wish for a “light touch” checking process.
The key point we have responded on is his remark that :
“There is of course no obligation on a non-Rail user to accept the ‘bridge pass’ and we do not make it as such,”

I append my reply.

Thank you for your prompt reply. RASC was pleased to note your comment in relation to “bridge passes” “There is of course no obligation on a non-Rail user to accept the ‘bridge pass’ and we do not make it as such,”
This has not been evident in the way that EMT staff have handled refusals in the past.

We would like your assurance that staff have been properly briefed to ensure they let those residents and other non-rail travellers, who refuse to take the pass, through without argument, to minimize delay.