I have just sent the following letter to the press. 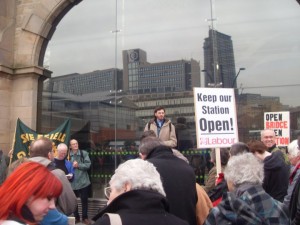 The Transport Secretary Justine Greening has offered Sheffield Council £3m for a new pedestrian bridge on condition that barriers are installed to stop pedestrians using the current bridge. The Labour Party have accepted this and are embarking on a feasibility study for a new bridge. As yet we do not know the exact location or what the bridge will look like.Rail experts inform me that £3 million will not be enough to pay for a new fully accessible bridge and it is clear from the Council budget that there is no spare money in Council coffers to contribute to the extra cost.

At the recent Council meeting the Green Councillors asked the ruling Labour group to reaffirm their commitment to create a public right of way across the current bridge and asked the Council officers to bring forward the application as soon as possible. The Labour Councillors voted against this.

We have a perfectly good bridge already that was paid for with public money. The coalition Government and the Labour Party are now colluding to spend £3m on another less convenient bridge, and barriers will
be installed to prevent people meeting elderly relatives from trains and stop those romantic goodbyes on the platform. All this in an age of austerity when the Government can’t afford to support disabled people
and the Council are shutting dementia homes.

Despite four years of argument the financial case for barriers has still not been adequately made. No one has been able to show evidence for the amount of fare dodging or produce statistics on the number of fare dodgers that have been caught. To clamp down on fare dodgers the train companies should be investing in employing more ticket collectors, not in barriers that prevent access to our station.