Norfolk Park Road one way given go -ahead 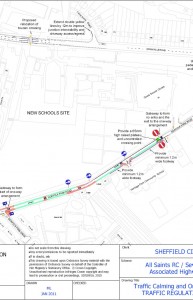 The Labour Council has given the go ahead to make Norfolk Park Road a one way street, despite the objections of numerous local residents. This will mean more traffic on the already congested Granville Road/Square, longer journies and more CO2 emissions. I supported the following letter written by Frank Abel.

As you know, I represented a group of local residents including the Friends of Norfolk Park in protesting against one of the recommendations in this Order: the proposal to make Norfolk Park Road a 1-way road.  In this letter we wish to make you aware of our extreme dissatisfaction about the way the consultation was run.

Our first objection is to the restricted nature of the consultation area.  A 1-way scheme is going to have a serious impact on many people in a large area around the change, especially where, as in this case, the diversion forced on drivers either takes them through a very congested area (Granville Square) or on a very long diversion to the north. People living in the main residential areas to the north (the roads between Granville Rd and St Aidan’s Rd) and to the west (between Granville Rd and Duke St) were not consulted.  We appreciate that consultation areas cannot be too widely drawn, but we feel very strongly that fairness demands it should have been extended to those areas in this instance.

Secondly, we came forward with a counter-proposal when confronted with the 1-way proposal, one which would obviate the need for that solution, and planning officers agreed to meet us in March to hear our objections and consider our counter-proposal.  They not only listened to all we had to say, they promised to feed our suggestion into the process at the Highways Department and reflect it in the report they would be writing.  We felt we had achieved something, but these proved false promises.  Our objections were briefly referred to in the report and brushed aside, but there was no mention of our counter proposal, which had clearly received no consideration at all.

By this time we were within a week or so of the Highways Committee meeting at which the proposal was to be decided and it was too late to do more than appear and make our objections.  I met you before that meeting and you suggested it might be possible to hold a decision for a month for further consideration, but all the Highways Department had to do was declare a time constraint (the new school year in September) and the decision to go ahead was impossible to avoid.

This so-called consultation was a charade.  The Highways Department has treated a group of local residents with contempt, manipulating a system unfamiliar to us.  We think that, having produced their own proposal, they were in no mind to consider another one from a group of local residents.  We believed we were contributing positively to a democratic process, but we were treated quite cynically by both officers and councillors.

This is particularly upsetting as we remain convinced that the only reason for the decision over 1-way was to maximise the parking on that road, which has been causing problems for many years.  We have never had any answer from anyone as to why that parking is so important that regular users of that road have to be confronted with inconvenient and time consuming diversions. After all, there are no residential properties along its whole length, the college site has its own parking and is well served by public transport.

The time to meet residents to discuss a highways problem is before the department has reached its own conclusion and spent much time producing plans.  Once they have those plans they are very averse to changing them.

What we hope in writing this letter is that everyone concerned will consider what was wrong with the process that we should have had such a crushing experience of it.