A good crowd turned up last night for the meeting about the junction. It was chaired by our new ward Councillor, Terry Fox, with the other Councillors all present and a good cross section of local residents. Following comments by various people the Council officers had come up with 4 different designs to change the layout of the junction.

Option 1 was the one I discussed in the previous post. This involves building out the pavement between Glencoe and Fitzwalter Road and making traffic from Glencoe Road first turn into Stafford Road and then turn into the junction. Double yellow lines would also be extended to improve driver visibility. It would cost £50,000. This was not at all popular in the meeting and nobody spoke for it. People were concerned that drivers would not understand the correct manoeuvre from Glencoe Road and confusion could lead to accidents. 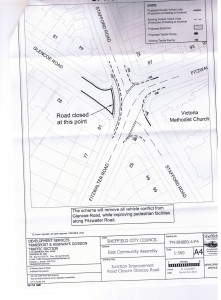 Option 2 was to close Glencoe Road at the junction end. This would improve the junction but it would cause difficulties for bin lorries. The end of Glencoe Road would be double yellow lines to enable drivers to turn round. It would be a similar cost to Option 1.This scheme was not particularly popular in the meeting. 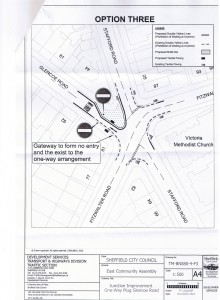 The meeting thought that all options 1 to 3 ignored the main problem which is inconsiderate drivers going too fast on Fitzwalter and Stafford Roads. Many people thought that these schemes may make the situation worse, because if the junction is “safer” cars are more likely to speed through it.

Option 4 does address this problem, by putting a roundabout in the middle of the junction thus forcing traffic to slow down. 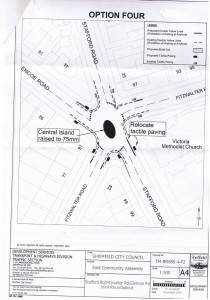 This has been what I have been arguing for for the last 27 years! However the Council are not keen on this option because it is £6000 more expensive and there are safety concerns. The main problem is still the visibility for drivers approaching the junction. I had envisaged the Give Way lines being nearer the centre of the junction, to ensure all routes have a good view of on coming traffic. This could be achieved by making the island smaller- it is shown on the plan as an oval, the longer side being 9m and the shorter side 5m. If this was reduced to 7m by 3m all the Give Way lines could be moved forward by a metre improving visibility and the pavements could be further built out increasing pedestrian safety.

The meeting also discussed two proposals by Glencoe Road resident Doug Bell. The first was the most radical, but this gained little support from the meeting. This involved making Glencoe Road and Stafford Road into a crescent, with a similar arrangement for the southern sections of Fitzwalter Road and Stafford Road. The other section of Fitzwalter Road becomes a dead end. 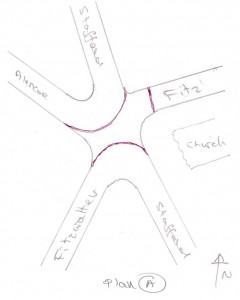 Doug’s Plan B was much more popular with the meeting. 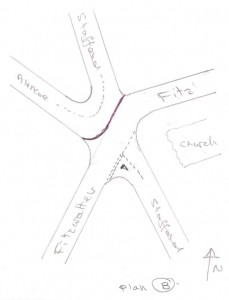 This involves turning Glencoe Road/Stafford Road  into a crescent, and the current 5 way junction into a T junction. The road layout does not prevent speeding traffic on Fitzwalter, but this may be reduced  by speed bumps or by a 20’s Plenty scheme.

Despite calls for a straw poll there was not a vote at the meeting, but people felt that 2 of these schemes were worth pursuing. These are the roundabout idea (Option 4) and Doug’s plan B. The meeting thought that this option could be tried out on an experimental basis to see how well it worked, possibly using temporary planters to change the layout of the junction.

There is now very little time to make a decision. The Community Assembly meeting is on December 9th, 5.30 pm at Victoria Methodist, Stafford Road. This will probably be the last opportunity for you to make your views known. There is a possibility that the decision could be deferred, but this is dangerous as it may mean the money currently available could be taken for something else. Residents did request a further meeting before the Community Assembly but nothing definite was arranged. I will let you know via this blog if I hear anything. The final decision rests with the Councillors, so if you have a strong view on this please write to them. Contact details are

You can also influence the debate by adding your comments to this post.