Today’s issue of Rail Management has this brilliant article from Sim Harris. It seems not only do EMT want to cut our city in half (they were manning the barracades again today, stopping anyone walking through the station), but they are endangering the health of our children by installing barriers that can break arms! 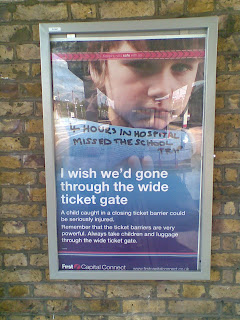 Here is the article in full.

Gatelines can damage your health Anti-gateline campaigners are boosted by a frank admission from First Capital Connect, as Sheffield demonstrators plan to step up their protest against East Midlands Trains
Gateline protests intensify as EMT launches random checks
East Midlands Trains has started random ticket checks at Sheffield station, effectively closing the footbridge to casual pedestrians without warning.
Campaigners who want the footbridge to stay open say they will be stepping up their protests in response. The first checks were carried out on Wednesday, and a spokesman for EMT owner Stagecoach said further manning of the station entrances could occur at any time, and might
become continuous. The policy is a precursor to the installation of automatic gatelines at the station, which have been bitterly opposed locally for more than a year.
The City Council has now passed several resolutions against the plan, and more than 80 local organisations have added their voices to the campaign of opposition.
The sudden imposition of manual checks has infuriated the protestors. They are warning of further mass demonstrations to come, in which they say they will attempt to cross the footbridge. It links the city centre with a tram stop and community housing and was opened in 2002.
There have been differing accounts of the first sessions of manual ticket checks, with protestors claiming that people with valid tram tickets were refused permission to cross.

FCC fuels anti-gateline protests by warning of hazards to children
Children in gatelines can be ‘seriously injured’ Situation is ‘utterly bizarre’, says one critic
Campaigners who oppose the installation of automatic gatelines at intercity stations are privately delighted by a poster from First Capital Connect which appears to concede that gates can be dangerous.
The DfT is firmly in favour of installing the gates at all principal stations, but although some schemes have gone ahead recently others are facing firm opposition in several provincial
cities. The reasons vary, but include the fact that gates can effectively close pedestrian routes across stations, as at Sheffield or York, and also the possible damage caused to the appearance of heritage stations.
A major debate is under way at Newcastle, while English Heritage has already rejected the
first plans for gates at York submitted by National Express East Coast. Anti-gateline campaigners maintain that the gates themselves are not fit for purpose at intercity stations in any case, where many passengers can be laden with luggage or children, or simply uncertain about how to use the gates because they only travel occasionally. The technology has also come under fire, with gateline programming often inadequate to cater for the millions of possible ticket prices which exist on National Rail. The arguments have not deterred the Department for Transport, which has signed several franchise agreements in recent times which commit operators to installing gates in all but the most exceptional circumstances.
But the First Capital Connect poster appears to be the first official concession that gates are not without their flaws, particularly when weaker or smaller passengers are involved.
It pulls few punches, warning that a child caught in a closing barrier faces ‘serious injury’, and that the gates are ‘very powerful’. Its advice is that children and other vulnerable passengers should
use the wide gate, but such a warning has not been posted at non-FCC stations with similar gatelines. One critic of the gateline policy commented: ‘It seems utterly bizarre that such a hazard should be created when we go over the top on many other safety issues. Has FCC done a
safety case, or is it a matter of gating at all costs?’
FCC said the advice was aimed at passengers who were taking small children through the gates, often at the same time as the adult, and it was then that problems could occur.
The company added: ‘Safety is our absolute top priority. We simply wanted to highlight that certain groups may find it easier to use the wide gate.
‘The gatelines comply with all safety standards. There have been incredibly few accidents in relation to the number of people of passing through barriers. The aim of this campaign is to further increase safety on our network.’

The arguments about gatelines have taken some new twists and turns in the past seven days.
First on to the stage comes East Midlands Trains, which is currently nominated for the coveted and highly prestigious title of Least Well Handled PR Event in 2008-09.
Few RM readers can still be unaware that EMT wants to install automatic gatelines at Sheffield
station, and that almost no-one in Sheffield seems to be on their side.
Gates would block the formerly freely available pedestrian link across the station, which was renovated at huge cost some years ago with the help of funding from the City Council.
Now EMT wants to restrict this community-funded link to railway passengers only or, more specifically, railway passengers who have tickets.
This, m’Lud, is where the heart of the dispute may be said to lie. EMT wants to block the footbridge to casual pedestrians in the interests of revenue protection, and the city doesn’t like the idea at all. The debate has been running for a year or more. The City Council has passed several highly critical resolutions, and the EMT approach (‘we’ll ask you but, by the way, we’re doing it anyway) has raised hackles from Tinsley to Dronfield.
But now the talking appears to have stalled. Last Wednesday, EMT ‘closed’ Sheffield without warning, using staff to monitor all the station entrances, and anyone without a ticket was peremptorily barred from the footbridge. Not only was this action peremptory, but arguably precipitate, premature and very possibly pointless.
For the net result has been to rouse Sheffield to new heights of fury. A major demonstration is now planned, and the campaigners will undoubtedly enjoy widespread support. It is exactly what a train operator does not need. The event has already spawned its own crop of contradictions. The campaigners claim even people with tram tickets were barred (the tram stop lies on the opposite side of the station from the city centre) while Stagecoach say a Supertram conductor was placed on the concourse to provide tickets, which would be accepted as a passport for the bridge. Well, somebody’s wrong.
Another query, not really answered so far, is what happens to passengers alighting from trams who then wish to cross the footbridge. The official answer is that their just-used tram ticket will be accepted by the railway staff. But that needs publicity: ‘keep your ticket if you wish to cross the station footbridge’. Has there been any? That is, according to a spokesman at Stagecoach
Group HQ (speaking with an East Midlands Trains hat on), a matter for Supertram. The trams are, of course, also run by Stagecoach. You couldn’t make it up.
This worrying example of left and right hands not working together is a deeply ominous symptom for the people of Sheffield, who are unlikely to take any of this lying down.
It is also possible to grieve for EMT (up to a point) because it in turn is a victim of the DfT’s determination to gate every station it can, irrespective of the type of passenger traffic which is handled. It seems to be impossible to explain to Marsham Street that what works well at Oxford Circus might be less suitable for Exeter St David’s. So the pressure is maintained, and EMT is now caught between a very angry city and a very determined government department, and will be wrong whatever it does next.
However, suddenly ‘closing’ the station was a PR blunder, and hardly an unpredictable one.
Now let’s welcome our second act of the evening. First Capital Connect has published a slightly worrying poster depicting achild with her arm in plaster (‘four hours in hospital; missed the school
trip’). It warns that gates can cause serious injuries to small children, who should always be taken through the ‘wide gate’ in consequence. No doubt this is right and proper, but very little has been said about it until now. What hideous incidents at obscure suburban stations have caused
this poster to be created? So, let’s summarise. Automatic gatelines, or the prospect of them, are
not only threatening to provoke open revolt in one of England’s largest provincial cities, but it is also now admitted (virtually) that they eat toddlers. Oh crumbs, Minister. Revenue protection
is all very well, but are we sure this is still a good idea?