Better news today for Park Hill It seems public investment has been brought forward to save the refurbishment of Sheffield’s Park Hill complex. 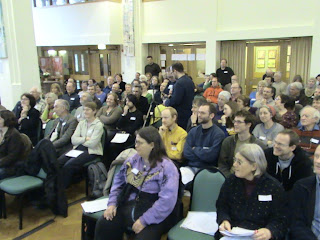 Also good news was the tremendous conference I attended on Saturday. Organised by Sheffield Campaign against Climate Change, the 130 delegates brought together an amazing amount of energy and enthusiasm, all determined to bring about a Green New Deal for Sheffield. The Green New Deal was formulated by the New Economics Foundation, and in a nutshell is about investing money in reducing our carbon footprint, to protect us from the triple whammy of climate change, peak oil and the credit crunch and at the same time providing thousands of new jobs.Unlike other conferences I have sometimes been to, this was not just a talking shop. It was the start of what will undoubtedly be a long process, but the day was geared around working up realistic policies that can be implemented by the City Council, local businesses or communities.
Ideas will be fed into documents like Sheffield’s Economic Masterplan, and we can use the powers of the Sustainable Communities Act to make ideas become reality.
One of my favourite ideas were following the Kirklees model for insulating homes and providing solar energy.
It was also very encouraging to hear Professor M Dharmadasa, who has been beavering away at Hallam University, researching into how solar photovoltaics can be made with an extremely thin film of solar cells. His invention should be being widely celebrated in Sheffield and throughout the world- it could be one of the most important inventions of the decade, as it will make pv far more affordable.