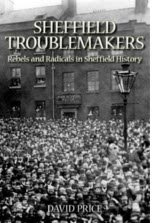 I am currently convalescing and am managing to catch up with some of my reading. I have really enjoyed reading David Price’s book, Sheffield Troublemakers Rebels and Radicals in Sheffield History. George III described Sheffield as a ‘damned bad place’ at a time when the town was notorious for radical agitation. This book traces this radical tradition right up to the 1980s, when David Blunkett’s Socialist Republic of South Yorkshire fought Mrs Thatcher. The book tells of dramatic events – the burning of the vicar’s Broomhall residence, Samuel Holberry’s attempted Chartist uprising, the ‘Sheffield outrages’ of the 1860s, John Ruskin’s Communist experiment in Totley, the Sheffield mass trespass and the raising of the red flag over the town hall in 1981 and the planned attack on St Mary’s Bramall Lane, now home to Sheffield Green Fair.It mentions 2 demos that I remember well- the Cutlers Feast, where we barracked Mrs Thatcher outside the Cutlers Hall in 1983 and the March against the Cuts, also in the Thatcher 80’s.

The book includes many colourful personalities, such as Joseph Gales, a brilliant newspaper editor who fled to America; Mary Anne Rawson, an impassioned anti-slavery campaigner; John Arthur Roebuck, a radical MP who brought down the government; Edward Carpenter, a socialist prophet and gay pioneer; Father Ommanney, whose ritualism outraged Protestants, J.T. Murphy, who fraternised with Lenin and Stalin; and Ethel Haythornthwaite, who fought to save the countryside.

I found the local references particularly interesting. Skye Edge used to be used as a meeting place for Chartist rebels. Shrewsbury Hospital on Norfolk Road, used to be the home of Ted Wickham, who pioneered Sheffield Industrial Mission. GHB Ward grew up in the Park area and, like me, was formerly a Sunday School teacher at St John’s Church, Park. Also like me he was driven out of the church by the vicar, who disagreed with his politics. He then went on to found the Sheffield Clarion Ramblers who led the struggle for access to the local countryside.

The book is valuable historically in describing the important part played in Britain’s radical history by this great Northern city, with its dissenting middle classes, its independent-minded artisans, its championship of the weak against the strong and its unwillingness to be pushed around.

The only disappointment with the book is its weak conclusion, which can only quote the “City of Sanctuary” and “Closing the Gap” (now abolished by the Lib Dems) policies of the city as hope for the future of Sheffield radicalism. I certainly see the growth and success of the Green Party as being part of that radicalism, and in particular some of the heroes of recent years, such as Jenny Hales, who campaigned for peace in Iraq in both Iraq wars, Deacon Dave who has just returned from Palestine and the Greenpeace protesters who shut down the old incinerator, painting Toxic Crime on the chimney.The radical tradition is still very much alive in Sheffield, and long may it continue!