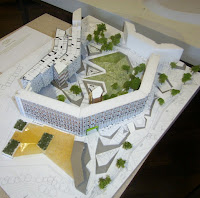 On Tuesday I went to the event at Park Hill Community Centre to see the latest plans for the redevelopment of Park Hill. Things are now moving quickly and it seems work will probably begin in the winter of this year.

The main change was to the car park. The large cylinder between the two blocks has now gone, and the building has been lifted off the ground to create a more open feeling. From a Green point of view though the car park is really a backwards step. Nowhere in Sheffield has better public transport access than Park Hill. It is close to the main railway station, the tram stop and buses. We really should be

encouraging the new residents to manage without a car, not provide a massive new multi storey car park. I think it should house a car park for the new car sharing scheme, so that cars can be loaned by the hour when people need them. The car park building has been improved slightly since the original plans, and now curves along Duke Street-but it is still a very imposing building that will cut out light to the centre of the complex.

The best new feature was the new pedestrian route from the flats to the station. Going down the hill at a steady gradient of 1 in 20, the new well lit path will be much easier to walk up and down than at present. To facilitate this there will be a new bridge over the current cobbled path, which will remain. It is thought that about 10% of the trees may need to be felled, but these will be replaced with oak trees and colour will be added with spring bulbs.

This is the car park seen from the centre of the complex. Under the car park is the new Grace Owen Nursery, with large outside play area. The new ethical shop is on the left. As the markets are now being moved to the Moor, this new shop is absolutely vital for the local community, and we must ensure that the dream becomes reality. Also under the car park are community recycling facilities.

Another new feature that I was not at all impressed with was a new road through the centre of the complex, from South Street to Duke Street. This will be like a “homezone“, so the road surface will not be well defined and will be designed to ensure that pedestrians have right of way. However, I am not convinced it will not be used by speeding cars or motorbikes, causing safety and noise problems. 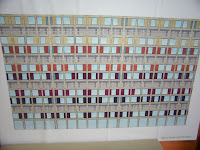 This is the new look to Park Hill. I was assured that the insulation will be of the highest quality and that the new windows will dramatically improve the buildings energy efficiency.

I still remain very disappointed that there are no plans for any renewable energy generation. There is still talk of a green roof, but this didn’t feature on the plans on Tuesday. No mention was made of finance or the proportion of affordable housing that will be available to tennents.

Park Hill In the Observer December 2008

Greens welcome “new life” for Park Hill, but ask “Where is the renewable energy?”